Orient to the journey Orient to the journey ...

The other day I found myself you-tubing instructions for learning how to free handstand. On the one hand, it was astounding that I was even thinking a free handstand would be within reach for me. On closer inspection, it demonstrated that I had lost the yoga plot.

Let me rewind for a bit. When I first started practicing yoga, I had little ambition for my own physicality, preferring to reside almost exclusively in my busy mind. It was a little over ten years ago, I was living a crazy life as a foreign correspondent based in Bangkok, driven by deadlines, competition and sheer determination to succeed.

My local assistant tentatively suggested one day that I undertake a 10-day silent Vipassanna meditation retreat. "Can you see me turning my phone off for ten days?" I replied. The next day, she proffered a yoga pamphlet. And I thought, "well, that maybe I can do"

In those early days, I didn't have any problem with the "non-competitive" nature of yoga, or so I thought. I was so physically weak that tadasana was strenuous and I spent most of the time in standing poses silently begging the teacher to say, "change sides". One day he suggested we lie flat on the floor and lift our legs to a ninety degree angle and back to the floor again, ten times. I can still remember the shake and shock of pain wave as I struggled to complete just one.

But I did start to measure myself, consciously and unconsciously. I would peek a look at other students to see if my forward bend was deeper than theirs. I would berate myself when a pose I thought I achieved yesterday failed to flow today. I knew it was not yogic to think like that, but I would notice other students do the same. The teacher would work hard to dispel our undisciplined thinking. I remember him once explaining that there was no need to hurry to release a tightness in one muscle, because as soon as we did so it would simply open a door to the next, and the next, previously hidden, layer of tension.

Somewhere along the line strength came. I began to hold poses for longer, and attempt more difficult poses. One day, I stood in a wobbly against-the-wall handstand. For someone who had never had arm strength, this seemed something to be genuinely proud of. Then I changed teachers, and my new mentor shook his head at my handstand and forbid me from using 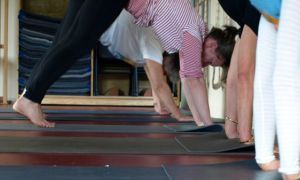 momentum to kick up. Instead I had to use only my inner strength (whatever that meant?) to gently lift my legs. It was more than a year before I re-hit that "milestone". On the day I reached that summit, he asked me to repeat, this time leading with my opposite leg, and I was back to the beginning again.

This variation came with a big hidden blockage - it took more than two years before my left leg would lift me into handstand. During this time, I was quietly obsessed. I would address the wall in dog pose, psyching myself into preparation. This was the day, I would tell myself, again and again, before I came crashing back to the floor. I would beg my teacher for feedback, "what am I doing wrong?" He would guide me to work on my feet, then my inner thighs, then the psoas muscle. Sometimes he would just say, "use your inner strength".  I began to practice letting go of the need to achieve it.

All the while, almost without me noticing, other things shifted in my life. I began to lose my tolerance for stress. I became aware of a deep yearning for nutritious food.  I started to step away from conflict more often. I let go of things in the past that used to bother me. I am sometimes finding, as a spiritual guide once said to me, how to live at peace with unsolved problems.

Orient to the journey, not the goal

Then one day I glided into a wall handstand with my left leg leading. It felt light; effortless. Perhaps it had lost some of the weight of importance I had placed on it. Perhaps I was finally strong enough on the inside. Mostly, I can replicate it, but some days it still eludes me. Some days I still feel heavy. Some days I still compete with myself. 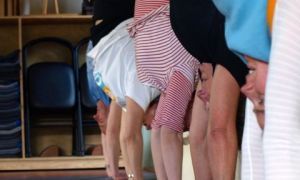 It was one of those days that I stumbled across, without knowing quite how I got there, the video teaching free-standing handstand. In the 20-minute clip, the yoga teacher displays grace and strength, and a clear method of teaching (albeit using momentum!) her free handstand technique, which involves kicking up with both legs simultaneously. As I watched it, I found myself mentally rehearsing my next mat session, wondering how quickly it would take me, now that I've overcome the left-leg block that had been holding me back for so long.

Then she wrapped up the video with this final message: don't forget, orient to the journey, not the goal. After all, she explained, it took her five years before she could balance in full handstand. I laughed and shut down the webpage. I can see I will need to live in peace with this unsolved problem.

Kimina Lyall is a Melbourne-based writer who has rolled out her yoga mat on and off for ten years. She is the author of Out of the Blue - Facing the Tsunami. www.kimina.com.au 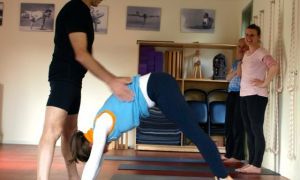 Are you ready to do a handstand?
Taking yoga on the journey of life