Taking yoga on the journey of life Jenny Green, 71, is just weeks away from embarking on a 270km walk along the hills of Massif Central in southern France – named the Robert Louis Stephenson trail after the author who walked it in 1878.

A daily practice of yoga asana and strength-building exercises is part of Green’ preparation for her big walk. “I am going to the gym to build strength, and I tend to finish my gym session with yoga,” Green says. “I think flexibility is a really important part of the walking process.

Green says even a short 10-minute yoga practice in the morning or evening brings more flexibility to her both physically and mentally. “It’s something about the expansion that happens in yoga practice,” she says. 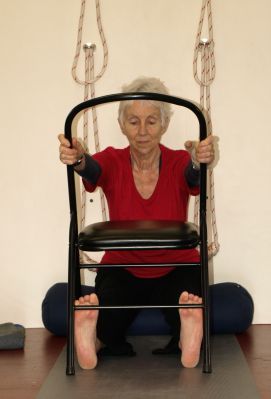 She began yoga in her 40s, and became more deeply into it in her 60s when she moved into a house in Fitzroy. “I moved into house close to yoga school and walk down there for classes twice a week.”

For Green, yoga is about awareness as much as asana. “It’s become part of my daily movements. I am conscious, for example, when I am waiting for a bus, that I can think about Tadasana (mountain pose), standing tall and straight. That is very calming things to do in the middle of a busy day.”

During a period of teaching in East Timor, Green found practicing yoga early in the morning became a tranquil moment in the hot weather and trying circumstances she was in.

Green finds big yoga classes a bit off-putting, which has led to her practicing more at home or on retreat. Older practitioners need more individual attention from teachers, she says – she’s had problems with one wrist for example – and it’s hard to get it in larger classes.

But Green doesn’t want to attend yoga classes for older people – she likes mixing with younger practitioners. It gives her a new perspective on her practice. “I enjoy the sense of being with younger people. You are aware that, even though you are older, and do it more slowly, that can be a benefit … rather than just leaping into it. I remember commenting to a teacher years ago that I was a bit slow, and the teacher saying it is good to go into things more slowly. That perspective comes with age.”

Green’s walk across southern France is not the longest walk that she has undertaken: she has walked half of Spain’s famous 900-km Camino trail, once a Christian pilgrimage and now a rite of passage for a million people every year.

She’s planning to practice yoga on the walk, partly to help reduce any stiffness, but also because of the sense of connectedness she experienced with both yoga.

“Yoga is about being connected and balanced, the body and the mind. You get an increased awareness of where the stiffness is in your body and are more able to focus on that part and release.”

Walking is also an activity that makes Green feel more connection with the places she travels to. “I like to travel but not as a tourist,” she says. “You see different things when you are walking, you are conscious of the weather, you talk to people. You are much closer to the culture.” 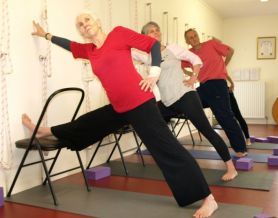 Are you ready to do a handstand?
Two little-known veggies I love, and why I buy Qui...