As you know, I am a kangaroo advocate, and several of these wonderful creatures seek refuge on my property from the local shooters. But who knew the word was spreading through the emu population that I love all animals and not just kangas.

One of our guests, Andrea*, popped outside early one morning in June to take photos. Standing with the camera glued to her eye, she was astonished to see an emu loom large in the picture frame. She snapped off a couple of frames and then came inside to tell me. 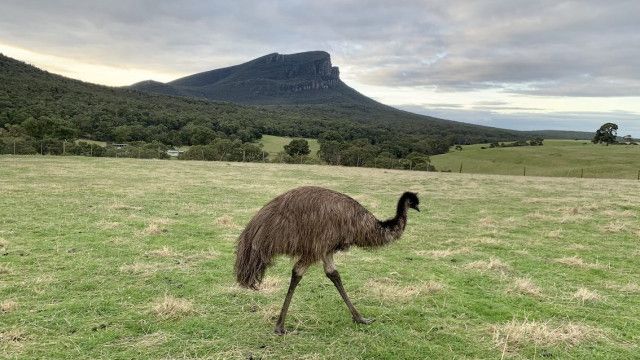 I was so surprised that an emu would venture so close to a person, that it came to mind that perhaps this emu has walked her from a wildlife release site about 12 km away.

I got on the phone to Shelley Burrows, one of our wonderful local wildlife rescuers, who said one emu had gone missing recently. "If it's ours," Shelley said, "it'll come over if you approach it with a bowl of food. And, you can confirm its identity because it's got an injury to its foot."

Sure enough, the emu came and guzzled down the bowl of oats Andrea offered it. The poor fellow was so hungry. We could see it was limping and rang to confirm to Shelley that the emu had come our way. Shelley was delighted to have found it and came by to assess him. He was very thin, his foot swollen and infected.

She began a course of long-acting antibiotics. It's amazing to watch. As he is feeding, Shelley simply lifts a small bunch of feathers and gives a swift injection.

We agreed to treat the wound on a daily basis with a sulphite compound, which we drizzle onto his injured foot with a syringe as he eats.

Although Shelley had thought maybe Kevin would suit him, we call him Miles because of the miles he walked to find us.

Miles is growing stronger and healthier every day and is free to wander as he will as his reliance on us diminishes. Frank and I love to see wild animals in our area thriving.

*Andrea is from Creative Cowboy Films and was part of an excellent documentary about the plight of kangaroos since the state government changed the rules to allow the shooting of kangaroos in Victoria. Please watch it and support the campaign to protect our kangaroos (and all our wildlife) here link