When Chloe Munro walks into the Canberra headquarters of the Clean Energy Regulator she wants to fill its floors with positive energy.

As chief executive, she believes part of her role is to set a high level of energy for her 350 staff to follow – and keep it there.

For the past year, however, that’s been a big ask. Last year, Munro was diagnosed with breast cancer and her treatment involved surgery, chemotherapy and radiotherapy.

Remarkably, however, Munro managed to keep performing in her full-time leadership role throughout most of the treatment. “I powered through surgery and eight rounds of chemo and it was only right at the very end that the cumulative effects caught up with me,” she says.

“I don’t believe I would have been nearly so resilient if I hadn’t got a good foundation of physical and mental fitness. I think yoga contributed to that a lot.”

Munro is one of a growing group of leaders who are practising yoga, and discovering that its physical and mental benefits flow across into their professional lives.

In fact, recruitment companies encourage leaders to include yoga on their resume, along with an interest in golf and work with not-for-profits. “Yoga is also in vogue,” according to a recent article in Business Insider. “ …it improves physical and mental health, and reduces stress.”

Yoga helps manage energy, Munro says. “Yoga focuses you inwards. When you are doing the kind of work I do, you are very outwardly focused. Your whole role is about creating positive energy – filling the building with you own energy. It is like performers on a stage: they lift up the audience with their energy.”

Munro first took a yoga class 15 years ago, but it was about 10 years ago that she began weekly classes and a 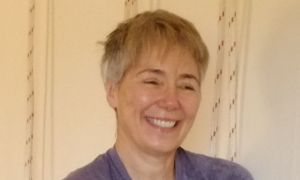 regular home practice. Running, which she started a few years ago, contributed a lot to the aerobic fitness that helps her through her cancer treatment and in her day-to-day leadership role.

“When you are a leader, you are completely wracked with self-doubt – if you have an enquiring and critical mind – but you can’t let any of that show. You have got to be positive and powerful and help others who have less of that strategic view.”

Yoga replenishes Munro. “You can’t keep that up remorselessly without some sort of nourishment. You can go home and shout at your partner, and say I have had an awful day, or you can find another way of getting inner strength and calm.”

Her practice reminds Munro to let go a little, to put her day-to-day role in perspective, and “come back into the fray with a balanced judgement.”

Going with the flow

Professor John Langford is an internationally-recognised leader in urban and rural water management. He’s the man who made dual-flush toilets mandatory in the state of Victoria, reducing the average flush volume from 11 litres to four.

After a distinguished career in public water authorities and academia, he is now a consultant currently advising 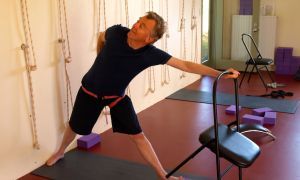 the Chinese government about river management.

Now approaching 70, Langford is trying (with some luck) to slow down. Practicing yoga, he says, is helping him make the transition from his active professional life to a four-day week, and a slower pace.

It was stiff joints, a slight stoop and a deterioating sense of balance that inspired Langford to join his wife at her yoga classes six years ago. “She had some problems with her back and yoga sorted them out,”Langford says. “I was so impressed.”

The practice has helped “slow down the decline”  of ageing, he says. “I feel better than if I hadn’t been doing it.”

Emotionally, he says the focus on breathing helps to lower his blood pressure.

Although he’s good at managing stress, he wishes he’d known about yoga earlier. “It would have helped calm me down after a highly stressful day. I am sure of that because it calms me down now.”

The strength and balance he’s developed doing yoga come in handy in his role as leader of a bushwalking group, too, he says.

A place of freedom

Gillian Braddock, SC, knows that other members of the legal profession see her as a little eccentric because of her yoga practice.

Her appointment as district court judge in Western Australia is the culmination of a long career in cival and criminal law, a profession well-known for its gruelling pressure and long hours.

After breaking her leg in 1984, she found a regular yoga class in her local gym. She was living in London at the time. “I’d broken my leg very badly and the yoga teacher said I could join on two conditions: one, I do exactly as she said, and two, if she told me to stop, I’d stop.” Once she’d recovered, however, her commitment to yoga faultered.

Returning to Australia to live in Perth in 1997, Braddock began practicing consistently. “It was partly a fitness thing, and at the same time, my husband wasn’t well and I thought maybe I could get him in. He became a great enthusiast.”

Braddock’s role means a lot of travel – from Kalgoorlie to Kununurra to Geraldton and back to Perth – and when trials are on, long hours.

Regardless of the hours, her work is intense. “There is a performance element to it, and you have to deal

effectively with all sorts of people who are in state of high anxiety.”

Braddock does not draw a direct link between her practice and any benefits to her performance at work, but says a “regular practice is very supportive, whatever you do.”

It encourage resiliance, persistance and determination, she says.

“But the thing that strike me most of all is that it is an alternative space to be in,” Braddock notes. “When you
are on your mat, as long as you have the intention to practice wholeheartedly, you are in a different place, a place of freedom from all the other stuff. It is a respite from day to day pressure, evn though you are working hard in the poses, and it is more effective than a bottle of wine!”

Braddock says she has learned, though yoga, to take a longer view. “I used to be very impatient and rage against things, Now I just wait and see. It could be age, though,” she jokes.

As for the doubters who have eyed Braddock’s practice sceptically over the years, they are coming around. She has introduced hatha yoga classes at the court and now has two classes a week: one at lunchtime and one after work.

“It took a little while to persuade some of our male colleagues,”she says. “We had smallish numbers most of last year, but it is perfect for people working in the court, including the staff who have to sit around, and we are working on building it up.”